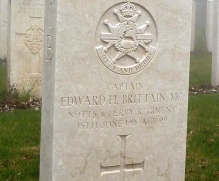 ‘Anon.’ no longer: the author of the ‘Menin Gate’ poem revealled

12 thoughts on “Where did Vera Brittain serve in France during the First World War?”