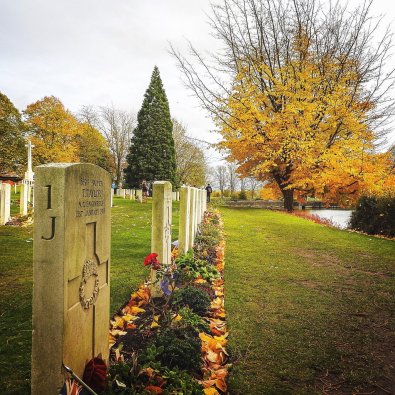 A Battlefield Tour with The Cultural Experience, 1st – 4th October 2020

I have designed this new, four-day tour for The Cultural Experience combining history, literature and art to experience the infamous Ypres battlefield. Through the words of more than twenty British and German writers, we explore the war in the trenches, the dressing stations, the rest areas, and the cemeteries. This is an opportunity to study works of literature and art in the precise locations which inspired them and where they were created. Combined with a rich historical context, travellers can gain a powerful understanding of these works both artistically and as historical testimony.

We walk ‘Plug Street Wood’, where Roland Leighton picked the violets growing around a corpse to send to his fiancée Vera Brittain, visit the battlefield graves of poets such as Francis Ledwidge and Hedd Wynn, both killed on the first day of the Passchendaele offensive, and look across no man’s land where Henry Williamson took part in the 1914 Christmas Truce. At Vladslo German Cemetery we will see Käthe Kollwitz’s sculptures of grieving parents which kneel before graves including that of her own son. The tour is the result of many years of experience reading, researching and visiting the battlefields as well as teaching literature and art of the Great War at Liverpool and Lancaster Universities.

What was ‘The Salient’?

Devastated by four years of shellfire and fighting, for the British the Ypres battlefield, guarding the Channel ports, was the key to the Western Front. The Germans held a natural amphitheatre of high ground, curved like the blade of a sickle with the handle formed by the Messines ridge to the south. This was the ‘Salient’ in which the British were surrounded on three sides, always observed and subjected to lethal shelling.

In time when there was less public display of emotion, poetry was a means for soldiers to express and try to come to terms with and express experiences of grief, trauma and intense comradeship. Poetry also became a means whereby soldiers at the front tried to educate those at home about the realities of the war: ‘I died in hell—(They called it Passchendaele)’, says a soldier in Siegfried Sassoon’s poem. Artists such as Paul Nash also saw this as a duty. Angered by the devastation of the Ypres Salient, he wanted his pictures to tell ‘a bitter truth’. 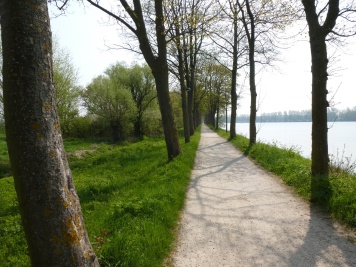 Day 2 – The Salient and ‘Third Ypres’ 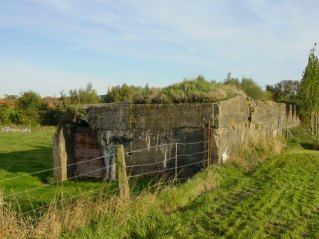 Day 3 – Behind the Lines 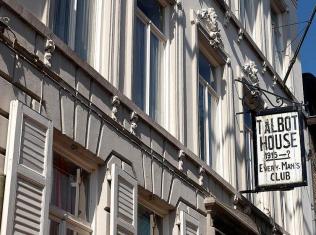 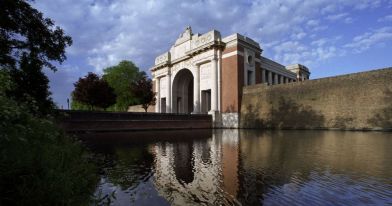 Join me on other battlefield tours with The Cultural Experience:

Where and how was Edward Brittain killed? The death in action of her brother Edward, in Italy in June 1918, forms the final tragedy of Vera Brittain’s memoir Testament of Youth. 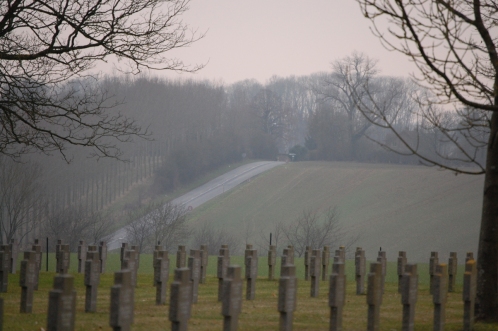 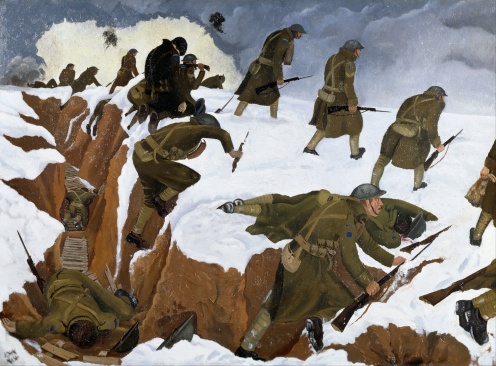 ‘It was in fact pure murder’: John Nash’s ‘Over the Top’

The death in action of her brother Edward, in Italy in June 1918, forms the final tragedy of Vera Brittain‘s memoir Testament of Youth.

Edward Brittain applied for a temporary commission in September 1914, when he was not yet nineteen years of age.

His parents gave their consent to Edward’s application, signing this statement written by him. (National Archives WO339/27827)

He was posted to the 11th Sherwood Foresters in February 1916 and badly wounded during the Battle of the Somme on 1st July when was also awarded the Military Cross for bravery.

He was eventually found fit for further overseas duty in March 1917 and returned to his battalion in France. In November his battalion was sent to Italy.

On 15th June 1918, the Austro-Hungarian army launched a major offensive in Italy, part of which fell against British forces on the Asiago plateau. The 11th Sherwood Foresters held San Sisto Ridge, a small, steep, wooded hill, rising 60 metres above the plain. Two companies of the Sherwood Foresters held the front line forward of the ridge, which ran just within the tree line. Captain Brittain commanded ‘A’ Company which held the right hand section of the front line.

Part of the British front line held by Edward Brittain’s company in June 1918, known as Alhambra Trench, in 2015 military barbed wire now keeps cattle out of the woods. 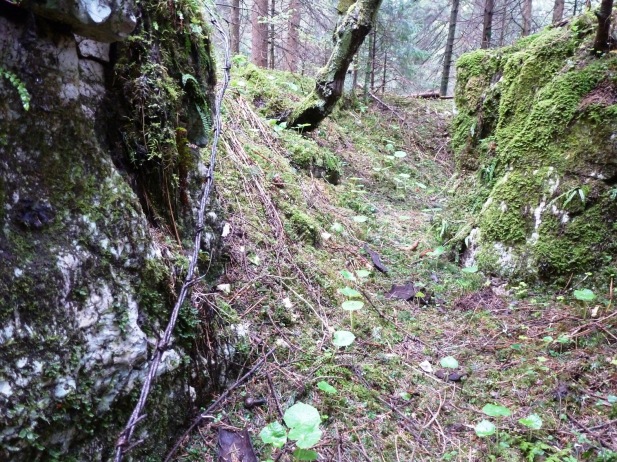 Alhambra Trench with wartime barbed wire. The positions were blasted and drilled from the rock.

In front were picquets of about ten men from each company with four machine guns.  At 3am the Austrians began a bombardment of the British positions which lasted for four hours and included gas shells on the front lines. The volume of gas was so great that it rolled down the rear slope of San Sisto Ridge into the valley behind.  At 6.45am the picquets saw troops led by small groups of stormtroops with flame throwers emerging through gaps in the Austrian wire.

The direction from which the Austrian attack came. The rocky outcrop to the right was the location of two British machine guns; the ten-man picquet from Brittain’s A Company was just beyond. The town of Asiago is in the valley behind.

At the time of the attack, Brittain was liaising with French troops immediately to the right. His Company had about 50 men after the bombardment, to hold about 800m of front line and he was probably the only unwounded officer in the company.  One of the machine guns in front of Brittain’s company was destroyed but the picquet opened fire as did the remaining machine gun which fired 1,000 rounds and inflicted heavy losses on the attackers.  However the attackers managed to outflank the picquet and machine gun forcing them to withdraw, which in turn caused the left hand machine guns to pull back. The Austrian attackers began to crawl towards the British wire and found a route through at the junction of the two companies of the Sherwoods. Entering the British trenches, the Stormtroopers were followed by trench clearing parties which worked left and right with grenades and flamethrowers, capturing 200m of the front line.

The deployment of British at the start of the battle. The 11th Sherwoods were holding the front line with D Company on the left and Brittain’s A Company on the right; C Company was on the ridge summit behind. Machine guns R1 and R2 were deployed in front of the British wire, as was a picquet of ten men. The Austrian break-in is shown by the red arrow and the area in which Edward Brittain lost his life is shown by the cross. (23rd Division GS War Diary National Archives WO95/4229)

Soon between 100 and 200 attackers were in the British trench, as the Sherwoods attempted to block the trench at either end of the break-in. Brittain immediately led a counterattack, forcing some of the Austrians back through the wire, and reorganised the defence. It was as he looked out for signs of the Austrians that he was killed, reportedly shot through the head by a sniper. 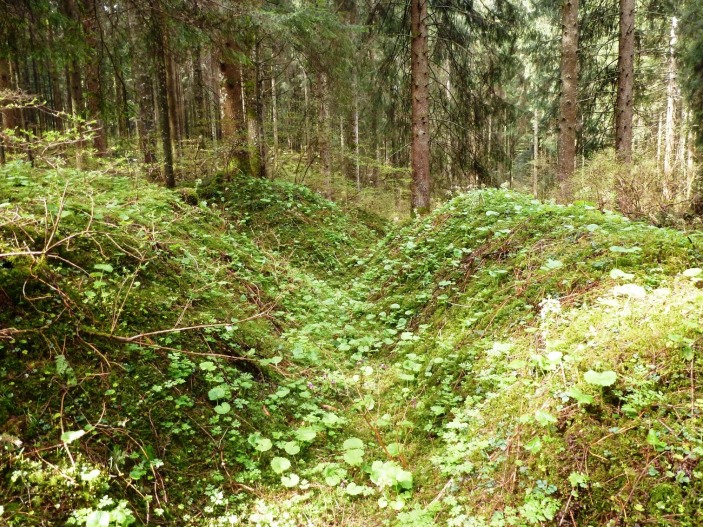 The area of Alhambra Trench retaken by Brittain’s counterattack where he was killed shortly afterwards.

Brittain’s Company was now officerless and the Austrians had at least ten machine guns inside the British wire. They resumed pouring through the gap into the British front line and about thirty pushed up a communication trench to the summit of the ridge into an undefended length of trench.

Communication trench where the Austrians broke in and pushed up to the summit of San Sisto Ridge.

A dugout near the summit of San Sisto Ridge.

A counterattack organised by the commanding officer of the 11th Sherwood Foresters, a 26-year-old Lieutenant Colonel, Charles Hudson, forced the Austrians back and retook the ridge but soon afterwards Hudson was seriously wounded by a grenade. A second British counterattack consolidated the hold on the front line. 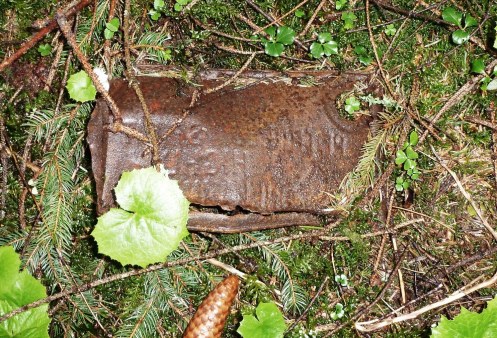 The top of a British petrol tin, used for transporting water to the front line, San Sisto Ridge, 2015. 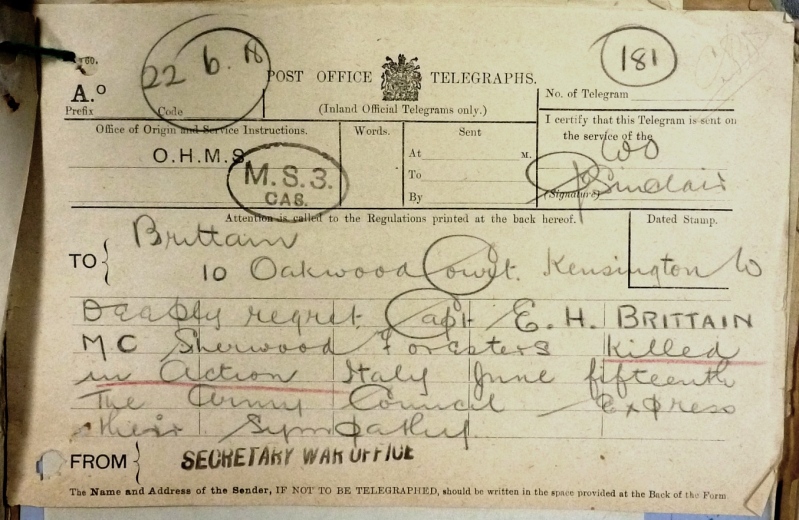 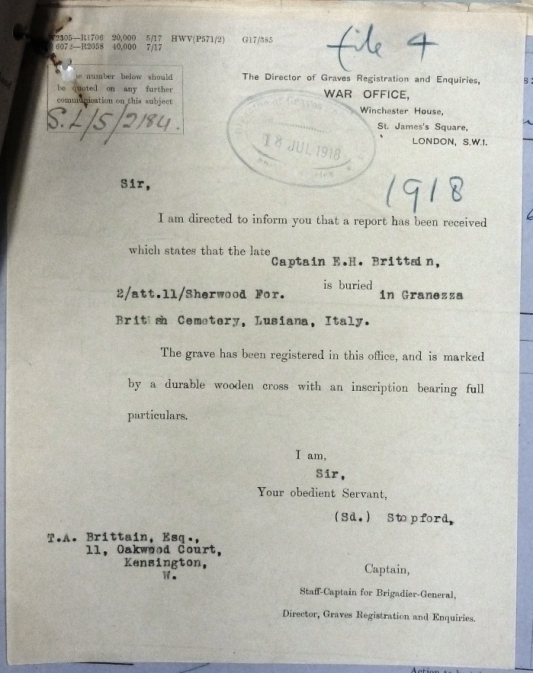 Notification of the location of Edward’s Grave sent to his father. (National Archives WO339/27827)

Vera Brittain visited Hudson in 1918 and in Testament of Youth describes how he told her that her brother was “sniped” by an Austrian officer and shot through the head, just after the counterattack which he had led.  She also quotes from a letter received from a Private in her brother’s company: ‘Shortly after the trench was regained Capt. Brittain who was keeping a sharp look out for the enemy was shot through the Head by an enemy sniper, he only lived a few minutes.’ 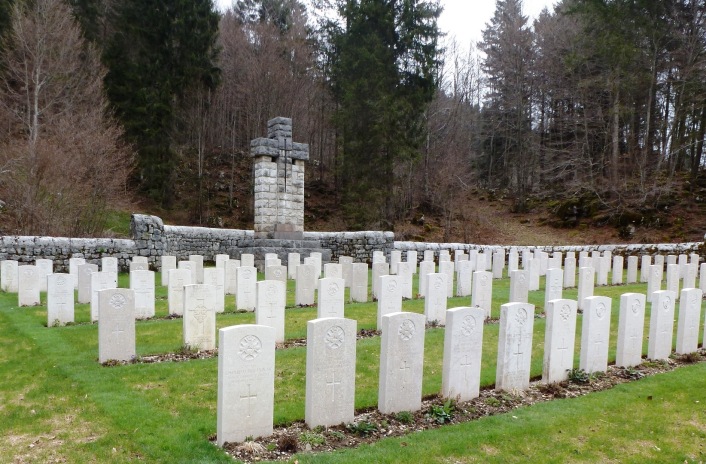 Edward’s grave at the end of the row buried with men from his Company. In September 1921 Vera visited the cemetery and planted rosebuds and a small asparagus fern beside her brother’s grave.

After the publication of Testament of Youth Hudson wrote to Vera stating that shortly before the attack a letter from her brother had been opened by the censor and found to contain references to homosexual activity with men under his command. Hudson said that he warned Brittain obliquely that his letters were read the day before and believed that as a result Brittain had deliberately sacrificed himself during the attack. Edward Brittain’s army service record contains no reference to this.  Edward’s death is thought to have contributed to their father’s suicide in the Thames in 1935.

The account of the action on San Sisto Ridge is based on Francis MacKay, Asiago (2001) with reference to War Diaries of 11th Battalion Sherwood  Foresters (WO95/4240) and General Staff 23rd Division (WO95/4229), and Percy Fryer, The Men from the Greenwood (1920).  Reference to the revelations by Charles Hudson is made by Mark Bostridge, Vera Brittain and the First World War (2014).

Where did Vera Brittain serve in France during the First World War?

The most effective chemical attack ever staged: the gas attack at Caporetto, 24th October 1917 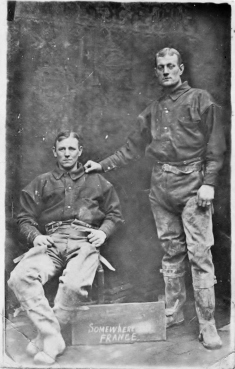 Who dug the Lochnagar Mine? 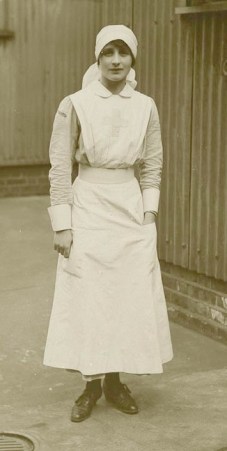 ‘Anon.’ no longer: the author of the ‘Menin Gate’ poem revealled