I was very pleased to be asked by the Oxford Dictionary of National Biography to write the entry for one of the lesser-known heroes of the First World War who died one week before the Armistice as a result of poisoning and overwork while developing protection against poison gas. 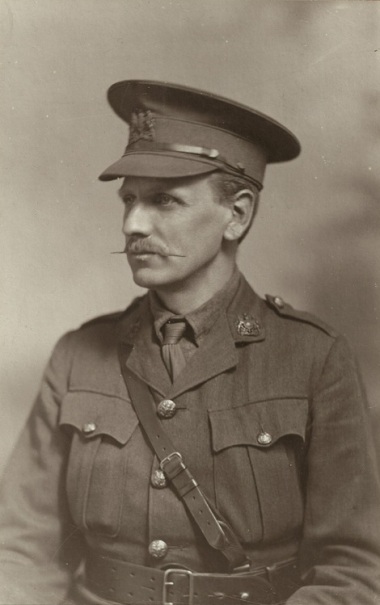 Harrison, Edward Frank (1869-1918), analytical chemist and soldier, was born on 18 July 1869 in Camberwell, London, the third child of William Harrison, a Home Office clerk and his wife Susannah, a school teacher.   His father died when he was aged nine and his mother opened a small school which enabled the education of her sons at the United Westminster Schools.  At the age of 14 Harrison was apprenticed to a pharmaceutical chemist in north London, following which he was an assistant pharmacist in Croydon.  In 1890 he gained a Pharmaceutical Society Bell Scholarship and entered the School of Pharmacy in 1891.  He spent long hours in the research laboratories of the Society and made ends meet by working at a pharmacy each evening and as an assistant lecturer at the School.  Hard work, seriousness and a strong moral purpose were features from an early age.  His parents were Particular Baptists but his scientific education and a rigorous critical discernment meant that he found such religious conviction wanting to be replaced by a belief in research for its own sake.  He retained however a strong sense that life must have a moral purpose.

In 1894 he was made a Fellow of the Royal Chemical Society but the desire to earn enough to marry caused him to take a position with Brady and Martin pharmaceutical chemists of Newcastle upon Tyne which lasted five years.  In 1895 he married Edith Helen Wilson, a school teacher and sons Noel Stuart and Douglas Frank were born in 1897 and 1900.  In about 1899 he was appointed head of the analytical department of Burroughs, Wellcome and Company at Dartford.  During this time he also prepared for his B.Sc. at the University of London and graduated in 1905.  In that year he formed a partnership with Charles Edward Sage as an analytical and consulting chemist and to teach at Sage’s Central School of Pharmacy.  The partnership was dissolved in 1906 and Harrison took up independent practice in Chancery Lane, London.  He was assisted by Percy Arthur William Self and by 1914 traded as Harrison and Self.  A reputation for careful and thorough research led the British Medical Association to commission Harrison to analyse a variety of proprietary medicines to prevent deception of the public, and the results were published in 1909 as Secret remedies: what they cost and what they contain, followed in 1912 by More secret remedies.  That year he gave highly effective evidence to the Select Committee of the House of Commons on Patent Medicines as chief witness for the BMA. 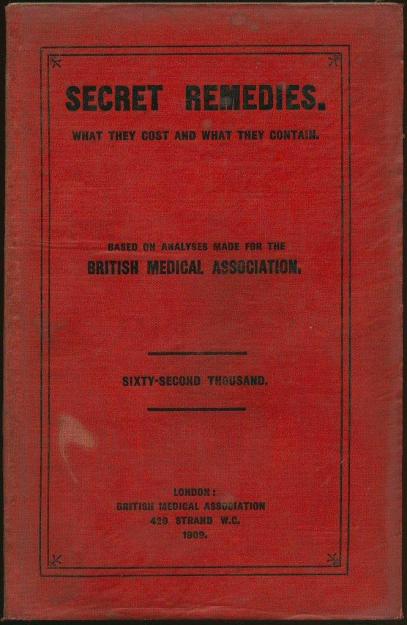 Secret Remedies, written by Edward Harrison for the British Medical Association in 1909 to expose fake medicines.

Following the outbreak of the First World War, Harrison made repeated attempts to enlist in the forces.  He succeeded in May 1915 in joining the 23rd (1st Sportsman’s) Battalion, Royal Fusiliers, reducing his stated age by two years to meet the limit of 45.  The Germans in April having carried out an attack in Belgium using chlorine gas, in July he transferred to the Royal Engineers following the formation of a Chemists’ Corps and was immediately commissioned temporary Second Lieutenant in order to work on anti-gas research.  Like most of his profession, he was motivated in particular by detestation for what was seen as the prostitution of chemical science by the Germans in the use of poison gas but he also had no doubt that the Allies should reply in kind.

Harrison joined the staff of the Anti-Gas Department, initially at the Royal Army Medical College at Millbank, London, which had the task of devising protection.  The situation was one of the utmost urgency, the Allies having been caught with no form of respirator.  The design and production of masks to protect against chlorine was comparatively simple but by July 1915 the problem was to devise a single mask which could keep out a potentially very large number of gases which at one point exceeded 70.  Hydrogen cyanide and phosgene emerged as the most likely to be used.  Harrison’s experience and intuition enabled him to make rapid decisions when scientists with a purely academic background tended to be overly cautious and deliberate in their investigations.  There was a high degree of self-experimentation and all the scientist during this most critical phase were at times incapacitated, often to the point of unconsciousness.

The War Office wished improved protection to be through modification of the existing chemically impregnated flannelette hood.  Although these hoods had some success against phosgene, they were penetrated by high concentrations and were not suitable for adaptation to meet new threats.  Almost immediately in July 1915, Harrison and a small team began developing a respirator in which the protective chemicals were layered in a filter box, initially an adapted army water bottle.  Soda lime permanganate granules, developed by Bertram Lambert at Oxford University, were capable of providing protection against a very wide range of substances but broke down into a dust which choked the wearer.  Hardening the granules rendered them ineffective until, after forty-nine attempts, Harrison discovered a successful formula.  Initially known as ‘Harrison’s Tower’, the respirator developed by the end of 1915 comprised a filter box connected to a facepiece with inlet and exhalation valves.  Adopted by the Army as the Large Box Respirator, 200,000 were issued to artillerymen and machine gunners between February and June 1916.  A compact version, the Small Box Respirator, was made a universal issue from August 1916.  The design meant that the filter box could be modified to protect against new agents; regarded as the most effective gas mask of the war it was adopted by the USA in modified form.  Harrison emerged as the most able in solving the complex problems of both design and production and made frequent visits to France to meet with chemists working at the front.  In January 1917 Harrison became Head of the Anti-Gas Department and in June was appointed a Companion of the Order of St. Michael and St. George.  On 1 November 1917, the Anti-Gas Department became part of the Chemical Warfare Department (CWD) of the Ministry of Munitions and Harrison was appointed an Assistant Controller of the CWD responsible for anti-gas apparatus.   In July 1918 he was appointed Deputy Controller and, in October, Controller of the CWD; in the same month he was appointed Officer of the French Légion d’Honneur.

His eldest son was killed in action age 19 on 30 July 1916 during the Battle of the Somme.  By October 1918, Harrison was weakened by two and a half years of constant work and the gas inhaled during the early stages.  He succumbed to influenza and died at the premises of Harrison and Self at 57 Charing Cross Road on 4 November 1918.  He was buried with full military honours at Brompton Cemetery.  Lengthy tributes emphasised his abilities, personality and organisational genius.  Memorials to Harrison were unveiled by the Pharmaceutical Society, Bloomsbury Square, and the Chemical Society, Burlington House, and both organisations continue to award prize medals in his memory.

The Harrison Medal awarded by the Royal Society of Chemistry. A large version of the medal forms the Society’s war memorial in Burlington House, London.

Contact me for details of sources. This article is available for download as an Oxford Dictionary of National Biography podcast.

I have also written about the Edward Harrison for The Guardian.

The Lochnagar Mine: how and why it was blown and who were the men who dug it