Recently in the news in the UK owing to working conditions in a huge warehouse, at the beginning of the twentieth century Shirebrook was notorious in Derbyshire and Nottinghamshire owing to the thousands of miners drawn to its vast colliery. During the First World War, many of these miners joined specially formed Tunnelling Companies to dig deep beneath no man’s land and the German lines. I have gathered the stories below for my book on Tunnellers at La Boisselle in 1915-1916.

A large group of miners recruited from collieries around Chesterfield and Mansfield crossed to France on 23 September 1915 and many were posted to 185th Tunnelling Company. The most notorious mining centre in the region was Shirebrook which had grown rapidly after a pit was sunk in 1896 and in fifteen years the population had risen from 600 to 11,000. It gained a reputation for immorality, drunkenness and violence with the newspapers filled with reports of attacks on the police, armed poachers and closing-time fights outside the pubs.[1] John Flowers, a 37 year old miner well-known to the police and courts, appeared before magistrates on 4 September 1915 for being drunk and disorderly in Shirebrook, during which he had offered his wife for sale. Although already under a bond of good behaviour, he was let off on the condition that he enlisted. [2]

Three weeks later he was at the Rouen Base Camp allotted to the 185th. Joe Cox and Tom Hodgetts, good friends in their late twenties, enlisted as Tunnellers on the same day as Flowers. Despite the chaotic picture of Shirebrook depicted in the local press, it was a comparatively small number of miners who regularly appeared before the courts. Eight years before, an encounter with one such individual had serious consequences for Joe and Tom when, one night after closing time, Hodgetts, a keen amateur boxer, agreed to fight the man. He produced a knife and stabbed Tom and Joe in the head and neck.[3]

Joe and Tom survived serious injuries and it may have been this experience that moved Joe to begin organising meetings at the Pentecostal Mission. 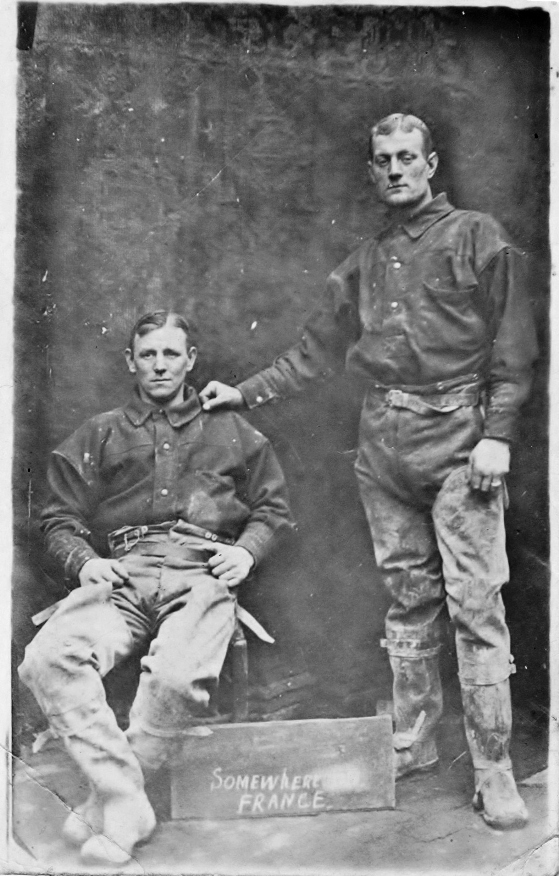 In a photograph taken in Albert in the winter of 1915-1916, Tom rests his arm on Joe’s shoulder; only one would survive the war. 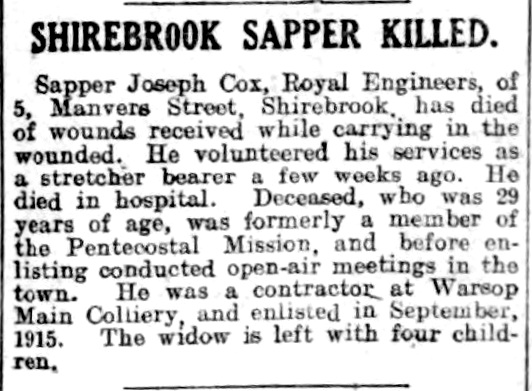 A group of miners from the Shirebrook area would excel in driving tunnels though the hard chalk of the Somme and Vimy Ridge. In 1916 they were awarded silver medals by 185th Tunnelling Company for a record drive of 127 feet 4 inches in 120 hours, including Harry Richardson (whose name was given in the press as J. Richardson).

John Flowers, Tom Hodgetts and Harry Richardson survived the war but Flowers was soon in court again for drunkenness, this time blaming wartime gas poisoning for his conduct. The gas he referred to was carbon monoxide, released in large quantities in the underground galleries by the detonation of massive explosive charges. It could cause violent behaviour and permanent mental impairment.

The Men Who Dug The Lochnagar Mine

Edward Harrison who gave his life to protect against poison gas