When nineteen underground mines were detonated at the opening of the Battle of Messines south of Ypres in Belgium, at 3.10 a.m. on 7 June 1917, the sound is frequently said to have been heard in 10 Downing Street by the Prime Minister, David Lloyd George.[1]  There is evidence that the earth tremor caused by the explosion of around one million pounds of explosives was felt at a great distance.  Charles Barrois, a geologist in Lille, 12 miles away, later told his Australian counterpart, Sir Edgworth David, that the effect was such that people rushed from their houses thinking that there was an earthquake.[2] Tremors were detected by seismographs near Utrecht, at 130 miles distance, and on the Isle of Wight, 180 miles away.[3]

The claim that the mines were heard in Downing Street appears to have originated as a report in The Times the following day which stated that Lloyd George heard them at his home at Walton Heath in Surrey. This was 140 miles from the mines and, by coincidence, the same distance as Downing Street. The Prime Minister was said to have given orders to be called at 3 a.m. and with others had ‘heard clearly the tremendous shock’.  The report further stated that at the same time ‘persons in the neighbourhood of the premier’s official residence in London also heard what they judged to be heavy guns across the Channel’.[4]

The science journal Nature repeated the claim that the Prime Minister had heard the explosions but, a fortnight later, printed a correction after receiving information from two Royal Engineer officers who had witnessed the detonations. One, a mile away from the mines, described the noise as ‘not so very great’, while the other, eight miles away, ‘saw the flash, waited for the noise, and heard only a slight “phit.”‘[5]

Other observers left accounts which enable a clearer idea to be gained of what might have been heard in England, if it was not the sound of the mines. Another Royal Engineer officer, a Tunneller Brian Frayling, observing from Kemmel Hill two miles away, described the tremor as ‘a violent shaking of the ground’ with a distinct interval before columns of flame rose.[6]  The Tunnelling officer Hugh Kerr ‘saw the whole area leap into the air – a never to be forgotten sight.’ But he expressed the view that to have heard the mines in London was ‘bunkum or wishful thinking!’ and ‘due to lively imagination’. It was the guns, he said, which had made the sound: ‘What about the barrage! That was a noise!’[7]

Eyewitnesses describe a sequence of three events: a powerful earth tremor from the mines, flames streaking into the air, and then the artillery opening fire.  For the first time in an attack, the detonation of the mines was used by the gunners as the signal for the opening of the British barrage and, within a few seconds, more than 2,000 guns opened fire. Only in describing the guns do the eyewitnesses describe a noise.  An artillery officer, Ralph Hamilton, watching the detonation of the Hill 60 and Caterpillar mines, experienced the tremor, the flames and then the guns:

First, there was a double shock that shook the earth here 15,000 yards away like a gigantic earthquake. I was nearly flung off my feet. Then an immense wall of fire that seemed to go half-way up to heaven. The whole country was lit with a red light like in a photographic dark-room. At the same moment all the guns spoke and the battle began on this part of the line. The noise surpasses even the Somme; it is terrific, magnificent, overwhelming. [8] 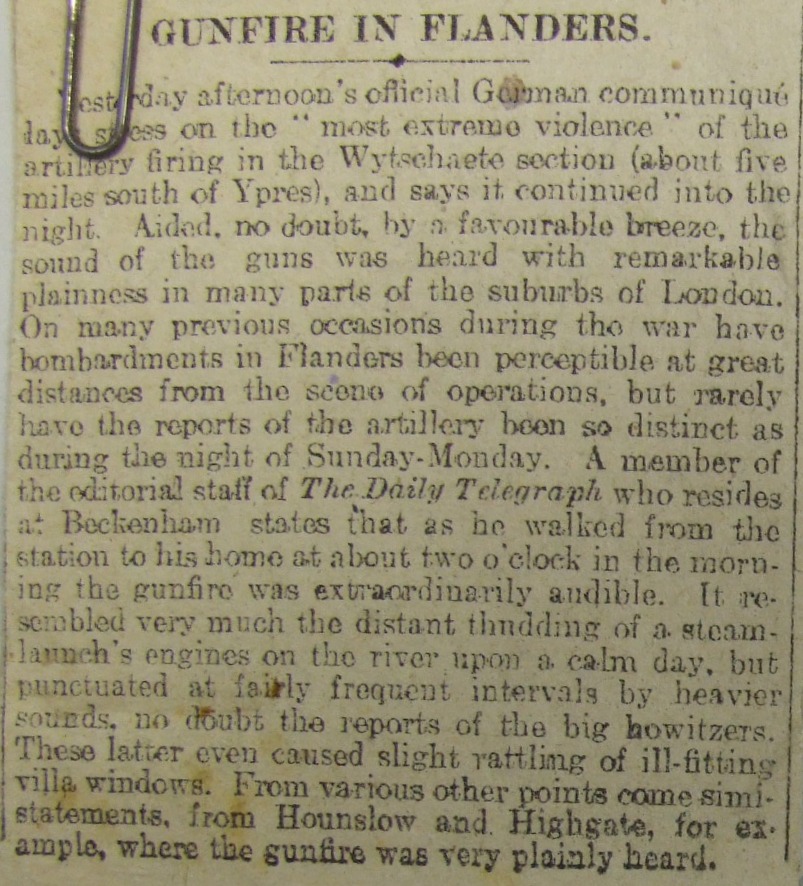 There is much evidence that gun fire from the Western Front was audible in England during the First World War, including in the days before the Messines attack was launched. The Daily Telegraph reported that one of their staff had heard it clearly, in a southeast London suburb at 2am of 4 June, resembling ‘the distant thudding of a steam-launch’s engines on the river upon a calm day’, punctuated by heavier sounds thought to be large howitzers which caused a ‘slight rattling of ill-fitting villa windows’.  In other parts of London, ‘from Hounslow to Highgate’, gunfire was plainly heard.[9]

If Lloyd George heard something at Walton Heath therefore, it seems more likely that it was the synchronised firing of more than 2,000 guns.

See below for references.

Myths of Messines: Did the Messines Mines Really Kill 10,000 Germans?

Myths of Messines: The ‘Lost Mines’

Myths of Messines: Killed by their own mine?

Notes to ‘The Big Bang Heard in Downing Street’:

The Story of the Lochnagar Mine

4 thoughts on “Myths of Messines: ‘The Big Bang Heard in Downing Street’”