A story in the Observer newspaper states that the poet Isaac Rosenberg has been identified in archive footage in which a stretcher bearer in the front right of the frame is ‘staring out at the camera with a haunted look’ (photo below). The article states that the date and location of the film are yet to be identified.

However I recognised the still as showing the same scene as a photograph by the British official photographer J. Warwick Brooke (Q 5732) (below) which enables the footage to be identified as having been taken on 31 July 1917 at Pilckem, on the opening day of the Third Battle of Ypres. 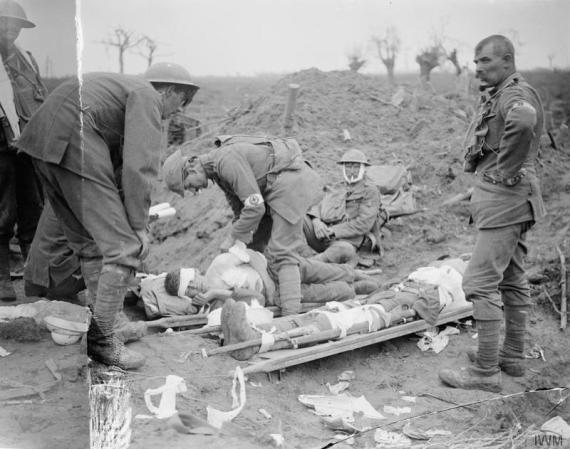 Furthermore, the photograph caption identifies a wounded man being treated as an officer of the Irish Guards. The ‘Rosenberg’ figure is not in the Brooke photograph but another stretcher bearer is clearly recognisable (identified by the ‘S B’ armband) standing on the right. This man can also be seen to be wearing a distinctive cloth ‘Irish Guards’ badge on his shoulder and this badge can also just be discerned on the ‘Rosenberg’ figure. Rosenberg served with the King’s Own Royal Lancaster Regiment (attached for a time to the Royal Engineers) rather than the Irish Guards and whilst, on occasion, he did duty carrying wounded there is no evidence that he was a regimental stretcher bearer. On the day that the photograph was taken the 40th Division, in which Rosenberg was serving at the time, was about 60 miles to the south and did not take part in the Third Battle of Ypres.

Who was Ivor Gurney’s ‘The Silent One’?

Yellow Cross: the advent of Mustard Gas in 1917 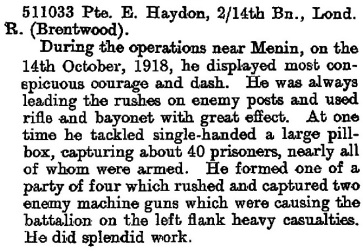 ‘Anon.’ no longer: the author of ‘Man at Arms’ revealed